nydiners.com takes no responsibility for the accuracy of any information on this page.  Nor do we claim to have copyright on every image on these pages.  This page is ONLY for reference purposes and should not be copied.


on the corner of Claremont and South street right behind Bill Fulmer Gulf station. The first owner I remember was I think John Sherrik who also owned the Cottge resturant on lower Main st by Monkey Wards (Another person) There is an a diner in Ashland ,Ohio that is not used as a diner now .It was a very popular place as it was a 24 hour diner in the 50's. It is now painted a bright orange . It is on South Street.

it was called "Peg's Diner", and was run by a lady named Peggy- but don't remember her last name.
I worked on the corner of Claremont and South St at Fulmer's Gulf, and he had a full-service gas station and-U-Haul rental service. Peg's diner was tucked in behind the station.
[August 2002 picture of the diner.  The owner wanted to tear it up, but the current renters, a Harley Davidson dealership, wanted to fix it up and give it a go!] 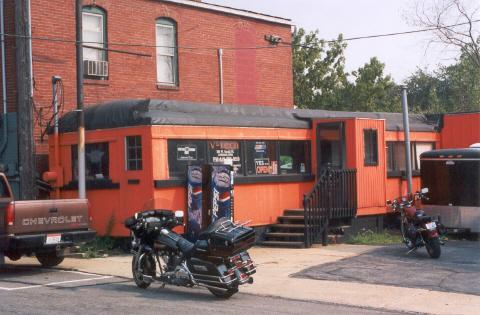 There is a little diner in Conneaut near the library.

I remember the Ashtabula Dinor on Main Street - and did eat there once
or twice. I think it was Main Ave dinor for awhile - at the end it was
Mallory's Dinor. That's about all I can tell you about it.  It is long
gone.
There was Dunk's Dinor the other side of the Nickle Plate RR tracks
on Main St.  Mallory's was on no side of tracks and Dunk's on the so
side.
Long before that there was Joe's Dinor on Center Street and there
was one on Rte 20 East of Ashtabula, just a tad east of State Rd, and I
ate there maybe once, but can't bring the name of it to mind, maybe
Lou's Dinor..  I'll ask my sister.  Seems like brothers had that one, it
was there during my school years, 1947 grad.  We had Paul & Millies'
Dinor on Rte 20 west in Saybrook Twp.  Great place for burgers.  I
believe Millie's daughter is still alive and living in Ashtabula.
There was another dinor on Center St years after Joe's Dinor.  Again
the name escapes me.  And I know from nothing about the company that may
have made these dinors.
There was one on Rte 20 far east  of Ashtabula - Paul (Gilletly?)
owned or operated it - it may have been part dinor and part building.
Long gone too.
Nearby Conneaut, OH had several dinors.  The Silver Dinor is still
downtown, again, part dinor part bldg.
[ August 2002 This still exists, but has been muddled and added on to]
There were two dinors west of
town on Rte 20, and another right in Conneaut, on So Side of Rte 20,
this one may have been part bldg part dinor, they called it Nickle Plate
dinor.

[another person]
I remember a diner on West Prospect which I think closed in the early
1970's I think it was called the Tip Top Diner. There was also one on
Center Street called the Center Diner

There was a diner in Andover Ohio that I used to go to with my family as a child in the
late 40's. It was called Shephard's Diner and was owned by Branton and Helen Shephard.


Fairborn, OH going towards Springfield, OH.  I don't want to say north or south
as I might get that mixed up.  Can't remember the name.  Not far from
Wright-Patterson Air Force base.


ago-- a couple of railroad cars were put up at a siding
next to a lumber yard and served very nice dinners in old dining cars.
It was in Linworth, OH, which is right next to Worthington. It was next to the Linworth Lumber Company.

of Annabelle's Diner in Mentor, Ohio. It was formerly located on Euclid Avenue at E. 204th St, in Euclid, Ohio. It was originally a Kenny King's restaurant ...
members.stratos.net/fieromike/AnnabellesDiner.htm - 4k - Cached - Similar pages 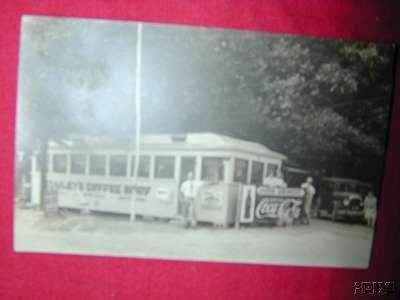 There is a diner in Malvern Ohio near Canton

The Morning Journal, Lisbon, Ohio, Sunday, January 11, 1997: an excerpt-
Salem's Last Diner Opened in 1955 by Dale Shaffer
On June 13, 1955 Jim and Mary Aldom held the grand opening of their new
Salem Diner, a beautiful $80,000 show-piece. It took place on their 17th
anniversary..........It also was the last one made by the Jerry O'Mahoney
Co. of Bayonne, N.J., and was shipped here on two railroad flat cars.
Salem's third and last diner owned by the Aldoms, was sold to Charles
Forsythe in 1975 and became Forsythe's Diner.  Four years later it was sold
to Shirley Davis and moved to E. Lincoln Way in Lisbon, where it still
operates as the Steel Trolley Diner...........

Crosser's Diner, Lisbon, Ohio is closed and a rumor says it will be moved to Wellsville.
John Howard "Wimpy" Crosser and wife Lorena A. Arter  abt 1944.
My husband says, Jimmy Hanna started the service station and diner.  He
moved to the west for his health.
Howard Crosser ran the gas station and his wife the diner.  I think it was
sold in 1974.

Aldom's looked like a sleek railroad car.  It was on State Street for many
years.  If you don't know about it, you want to talk to Salem's historian,
Dale Schaeffer.  I don't have his address or phone; try for info from the
Salem News or the Farm and Dairy (a weekly).


used to have at least 2 others.  One was located on East Washington Row and was
torn down (or moved) many years ago.  The other was located at the NE
corner of Warren St & Huron Ave.  It was torn down about 4-5 years ago
to build a CVS (ugh!).

Findlay Note : Cherry and Center are parallel to eachother, one block away from eachother.  Thusly, below is probably the same diner.

I don't know if this will help you or not, but I remember a railroad type dining car in Painesville, Ohio.
I ate in the car between the years 1936 and 1940.  It was located on State Street between Main and (I believe) Washington Streets.
I do not remember when it was removed, but I do recall that later at least starting around 1946 there was a new diner built there and called "Dietzen's (spelling) Diner.

There was also "The Spot" in Bellefontaine, Ohio at one time, now gone, same owner as the one in Sidney.

There was a diner on the corner of Commerce and Wick Avenue in
Youngstown.   [different person]  It was there during World War II
and continued in business probably until the 70's.  It then was dismantled
When I was there last summer, they were building a court house (I think) on
the site.

Lisbon & North Lima, Ohio - I know there are old diners in those two towns.
(Note: Lisbon is in Columbiana Co., and that is confirmed)

LAKESIDE,OHIO. ABOUT A BLOCK EAST OF THE LAKESIDE HIGH SCHOOL,1953--1954 WAS A DINER CAR.IT IS NOW LONG GONE


There's a diner at the heart of Kent -- and when I was there last year, it was still going strong.

There was an old Richardson Dining Car in Ravenna

Update- One of Max's Diner in Mansfield was NOT an authentic diner the other was!


schedule, so I guess that should be by the second week in June, in that time
frame. I'm not knowledgeable enuf to know if it meets the criteria for
"diner" or not.  It's white like a White Castle building, sort of resembles
that.

I'm not sure of the definition of a "diner", but I think "The Spot" in Sidney, Ohio was one.

I could see one abandoned at the top of a hill on the South side of the toll highway.  I think it had started out as a RR dining car (someone told me)  [Note: I found out this is in Hudson]

It was located near the line between Barberton and Akron.  The street on Akron side is Kenmore Blvd, Barberton side is Wooster Road.  The streetcar line  (tells you how long ago that was!) turned around to head back into Akron there.  The diner, if I remember correctly, was open 24 hrs a day and since it was near the end of the line, catered to many of the factory workers  heading home  from swing and night shifts.

There is a diner named The Emerald Diner in Hubbard. (This was recently brought in from another state)

There was at one time a diner in Warren, Ohio. It was located on East Market
Street if I remember correctly. It was probably there from the 30's maybe to
the very early 50's.

from the old grocery store run by a mr Mcsweenry.  This car was the first resturants owned by the Burnetts before they moved across the street into the place beside the dry cleaners.  Then they bought Bishop's drive in.  Their family might be able to give the guy some info as the son i played with still runs his place between Seville and Medina named Michaels i believe.