Introduction - In 1939, Arthur H. Halladay of Oswego and M.H. Whitehouse of Watertown came together to start building diners.  Their first two diners were built in Watertown, after which, their third was built in Oswego.  They were unsure where they were going to continue the company, but did decide to keep the company in Oswego.
Their diners were sectional.  They built the whole diner at the factory on West First St. in Oswego, knocked the diner down into sections, and shipped the sections to the location.  The diner was reassembled, "in hours", by the "tightening of a few bolts."  The diners came fully equipped and the company could even furnish a short order chef to get started, if necessary.
The last newspaper report about the company was Sept 30th, 1940 and the last mention so far was Oct 15, 1940. 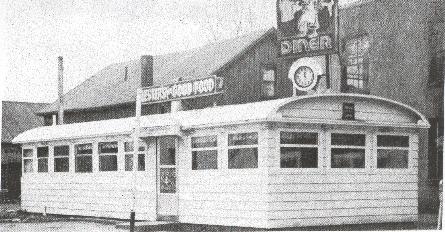 Possibly a General Diner, once in Cortland, NY