Because New York has so many diners, some information had to be left out. Much of it was a difficult decision, made easier by editors.  Occasionally, we will put new stories on-line here for your enjoyment. 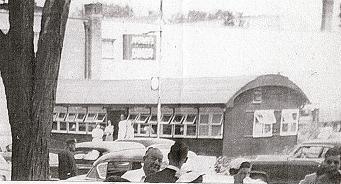 The diner was a wooden, barrel roofed structure with awning windows.  Eddie McGrath, owner of the Pawling RR station restaurant (diner) hearing there was to be competition on East Main Street, had this Bixler diner brought in from Norwalk, Ohio on a flatbed to be installed on East Main Street It became a popular meeting place for young and old alike: High school sweethearts, families and friends gathering after Sunday mass at St.John's Church, fans after basketball games,etc. During WW II, when the U.S. Army Convalescent Center was located at nearby Trinity Pawling School, and also at the present property called Lakeside Park, the diner was "standing room only." Some of the soldiers would go back of the counter and serve themselves. When the war ended, Route 55 was rerouted outside of Pawling Village.
Also, the New York Central Rail Service was severely curtailed at about the same time. McGrath's diners were negatively impacted by these events and were eventually closed.


Newburgh, a case study in diners.

Just like any other city, the diners in Newburgh started out downtown, and primarily focused on the main thoroughfares, Broadway and South Robinson. In 1950, all of the diners could be found on these roads. Today, there are two diners left in downtown. One shuttered on Broadway and the other just a block in on Lake St. The diner was in such bad shape in 2006, that there were no ceiling or wall panels. These diners suffer from two main problems: lack of parking and a run down neighborhood. Both are not recognizable as classic diners from the outside. The former Callie & Bills is covered with Bricks, which was done as an attempt to modernize this 1930s O'Mahony. The conditions of all downtowns, especially Newburgh's, forced businesses to head for the suburbs, and that is just what the diners did in Newburgh.

There was a diner in the 1940s known as Harvey's Diner on Route 17K, west of Newburgh, but that is long gone. In the place of these classic styled diners 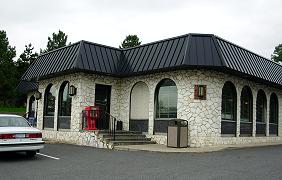 came the environmental diners. The three diners that located in suburban Newburgh had a keen eye on the transportation habits of a car driven culture. On 17K, which aligned with Interstate 84 in this area, two diners found their home. Even more importantly, Interstate 87, the main north south route, had its main exit for Newburgh right at this same location. The Neptune Diner was nicely situated to catch much of this traffic. Come in at night, and you may find a few police officers enjoying a break in their jobs. This 1960s Fodero diner holds a quiet unassuming position in the diner world, just serving good food, and that is that. Farther out Route 17K and at another exit for I-84 is the Stewart Airport Diner. This diner was situated to catch the state highway, interstate and airport traffic. Heading south on Route 32 from downtown is the former Vails Gate Diner. The diner sits are the edge of Vails Gate, what is not a commercial sub for the suburban southern fringes of the Newburgh area. The diner is your typical 1960s environmental diner from DeRaffele.

Being so close to New York City, and changing architecture, these unchanged environmental diners become rarer in the region. In 1997, PMC was called upon to update the Vails Gate Diner, which was now going by the name of New Windsor Coach Diner. Above the door is some stainless steel, though it is really a minimal offering to diners of the past. As you enter the vestibule, the entire room is made of wood. This wood is brought into the diner as a predominant trim material. 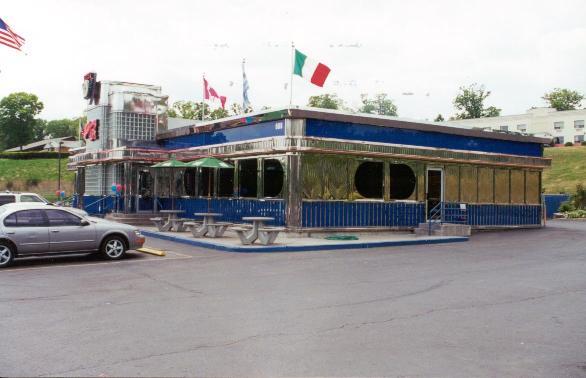 Along a section of Route 300, which has now became a major commercial district, a retro diner was built by Kullman. The diner has the classic diner looks on the outside, but inside, looks and feels more like a pub. Johnny D's a chain of diners, has taken over ownership of the place. Owner Johnny Daskalis was called the “Hudson Valley Diner King” by the Times Herald Record. The diner even received a writeup for having some of the most cleanest bathrooms in the county. Closer to the on and off ramps to the two Interstates is the Gateway Diner. Built in 2001 by PMC, Frank Georgakopoulos, the owner's brother, and manager of the diner, had an idea for the design of the diner. He did not want to follow the trend of stainless retro diners. From the facade of polished granite and soft green finished cornice, to the three glass-ceilinged towers, (one over the main entrance, and two smaller tower at each end,) the diner has an attractive inviting look. The entire diner has an open airy feeling to it, with a center atrium. Frank describes the diner as, “My big fat Greek diner.”

At the intersection of Route 9W, the old north south highway, and Interstate 84, the only way across the Hudson River from Newburgh, sits the Alexis Diner. Another twenty four hour diner just like the Neptune and Gateway, this diner has received frequent makeovers, with PMC coming in to remodel the diner in 1996. The Alexis has five dining rooms and needs all of them during the lunch rush hour. Just the marble on the main entranceway into the kitchen looks like it could cost more than many classic diners. It seems that business allows the owners to spare no expense when it comes to showing off their diner.

Not worthy of an entire section due to the lack of diners today, but that doesn't mean the Adirondacks are void of history. In tiny villages centered around the lumber trade, and larger commercially driven places, a lunch wagon could almost always be found in the first part of the 20th century. As industry, namely the lumber business but also mining, left the Adirondacks, so did most of the wagons. Very few were replaced by diners, and even less of those are around today.

Ogdensburg is a good place to start our story. T.J. Buckley summered here in Ogdensburg. He had many stockholders in the city, 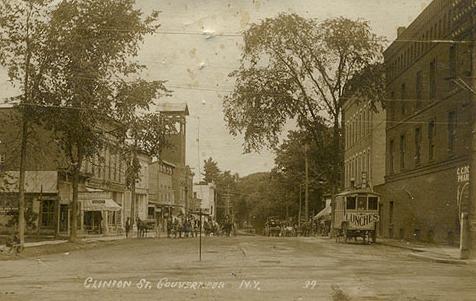 and even donated a good amount of money to the local church. Throughout the northern Adirondacks, he set up his wagons, and found a local businessman to operate it on a lease basis, usually for three years. R.H. Hanna was one such gentleman in Plattsburgh. Buckley thought so much of him, that he offered Hanna the job of going to Buffalo during the Pan-American exposition, and run his Kiosks. Ephraim Hamel also visited Plattsburgh. His customer was Asa Fisk, who had one of his Columbian Cafe's in operation.

With all the lunch wagons that dotted the Adirondacks, it would not surprise me if one was still around in someone's barn. The size of locations that had wagons is amazing. Morrisonville, Antwerp, Pyrites, Tupper Lake Junction, Alburg, Westport and Mineville. Traveling through these places today, it is truly amazing to imagine a lunch wagon at these locations. In South Colton, on the western side of the Adirondacks, a unique wagon moved to town in 1946. The Black and White Lunch Wagon, the last one to call Watertown home, was moved to South Colton by Vincent Murphy who planned to run it, but instead, just a few months later, enlisted in the Army and put the wagon up for sale. Canton had a lunch wagon that made national news. The Palais Royale became known for its owners, two St. Lawrence University students. Eddie Maier and Eugene Contois bought an old lunch wagon and fixed it up, serving food to the students at St. Lawrence. They worked their class schedule so that while one was taking a class, the other was working at the wagon. These enterprising young men paid their way through college this way. With new owners in 1924, the wagon caught on fire and was no more. 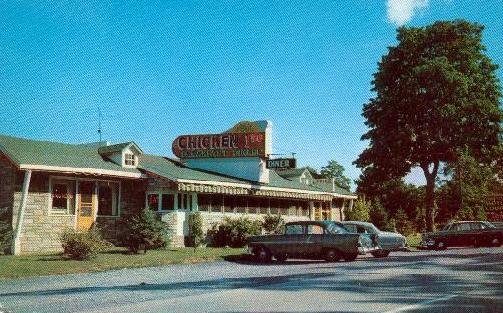 Fire in lunch wagons seemed to be a constant fear in the north country, especially in the winter months. In 1902, John Pogue of Watertown purchased a Buckley lunch wagon. The blurb in the newspaper stated, “the gas tanks are on the roof so that there is no danger of fire.” Perhaps the worst accident was at the McManus Diner in Potsdam, 1934. This Ward & Dickinson diner had its front wall bulge out during a gas stove explosion. Two customers, Robert Tambling and Gibson were hurled to the floor from their stools. The temperature at the time of the accident was minus 20 degrees which led to frozen pipes. Two other diners were caught in the wrong place. The Clinton Diner in 1928, a Tierney, was next to a theater that was gutted by fire. The employees at the diner even helped with the cleanup of the theater afterwards. Also a diner in Ogdensburg was mostly destroyed by a theater wall that collapsed on the diner in 1972. Fortunately, the proprietor and employees had time to get out.


Lake Placid has a unique history too. Besides several lunch wagons, the village had two diners, one being a Ward & Dickinson. Harold McLaughlin bought the Ward dining car that was first located in Anderson, Indiana for three years. His favorite customer was perhaps Muffins, a tramp mongrel canine. At the diner, the dog received three meals a day, and the waitresses and countermen set up a collection each year for Muffin's license fee. In 1940, Muffins was entered in the Lake Placid Kennel club spring show and won a pink ribbon for having the most breeds. Isador Urfirer brought the other diner to town in 1937 and named it the Little Diner.

Saranac Lake had a 1929 O'Mahony. Tom McVeedy bought the $10,500 diner and received a $400 rebate for returning the wheels. In 1970, the grill was moved to the back kitchen. In the diner era, Ward & Dickinson made a decent dent in the Adirondacks. Besides Lake Placid and Potsdam already mentioned, they also placed diners in Tupper Lake, Malone and two in Ogdensburg. The short lived General Diners out of Oswego, placed diners in Malone and Canton. Massena had its share of diners. Some by the names of Guy's, Bell's and Flying Saucer Diner. Even a one time Massena Observer employee "Charley" Fuller once ran a lunch wagon beneith the

London Bridge. The diner still in Massena today has been greatly remodeled, but was built by Kullman in 1940. Though it's not the food that makes Spanky's Diner so well known. The book “Haunted in Northern New York” by Cheri Revai says that as many as seven ghosts haunt the basement of this diner. Owner Alex Krywanczyk even says he saw a tray picked up and flung across a counter.