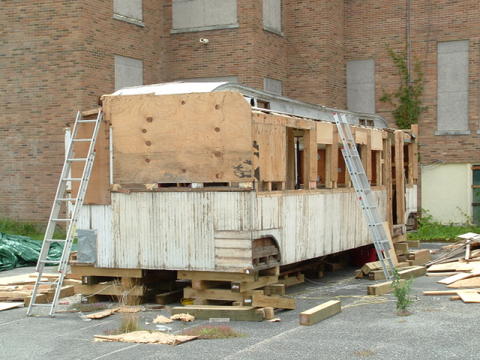 Thanks to Glenn Wells for allowing us to use the above photo. Please give him credit if you use this photo. -2006

About two years ago(2001), Daniel Zilka, director of the American Diner Museum sent me a picture from wellingtonohio.com that showed a 1920's wooden diner right next to a gasoline station.  In finding out that the diner still existed today, I went out to Wellington one winter weekend with two of my friends.  Upon seeing the diner, it looked nothing like it did in the picture on the outside, but the inside was just something to see.  The ceiling was all original, along with original stools.  I knew this was a special place.  Thusly, every time I was going through Ohio, I made it a point to stop.  In early 2003, two diner fanatics like myself let me know that the diner was in jeopardy of being razed, in favor of a strip mall.  I contacted the current leasee of the diner, Sandra Aden and found out it was true.  I let her know that if no one in town wanted the diner, I would love to be able to take it.  Unfortunately, no one in the village of Wellington was interested or had the resources to keep the dining car in town.  So, in October, plans were made to have the diner prepared for a move.
On November 10th, The diner in Wellington, Ohio headed on a flatbed truck to Gilbertsville, NY.  It arrived the next day.  Volunteers from the American Diner Museum, including Daniel Zilka and Toni Deller sacrificed time and effort to help with taking off the "newer" exterior and detaching the dining car from the back building.  Without them, this would not have been possible.
This webpage will chronicle the developments in the restoration process of the diner.  Also, below, will be some of the history of the diner when it sat in Wellington, Ohio.

February 2007 - The diner has been given to Gordon Tindall who has already restored one diner, ironically also built in 1927.   This will ensure the diner being restored.  The other diner is called the Red Rose Diner, which Gordon runs in Towanda, PA. Visit him!

Work done while in NY --- NYDiners.com